Our founder has always had a burning desire to inspire people with vocal music, and what better way to do so than by leading an organization that gives thousands of children the skills necessary to develop their voices and musical talent? Her Bachelor of Music degree in Music Education from the University of Texas (Austin) and her Master of Music degree in Choral Conducting from the University of Colorado (Boulder) formally prepared Jena for this mission. Her postgraduate study through Choral Music Experience (Doreen Rao), the Kodály Institute (in both the U.S. and Hungary), Toronto Children’s Chorus Symposia (Jean Ashworth Bartle), Creating Artistry (Henry Leck) and other specialized courses has propelled her to the forefront of children’s choral organization leadership. She has prepared children’s choruses and soloists for many of the leading choral and instrumental conductors in the state. As a leader in the field, Jena has served the Colorado chapter of the American Choral Directors Association (ACDA) as R &S  chair for Children’s Choirs and the Organization of American Kodály Educators as a member of the National Children’s Choir Committee. She is currently ACDA’s Southwestern Division Children’s Choir R&S Chair. Her moments of greatest joy are found in the highs of rehearsals and performances of the Young Voices choirs and the Sing A Mile High International Children’s Choral Festival.

Chrys Harris is the Program Director and Tour Director of Young Voices, as well as the Founder and Festival Director of Sing A Mile High (SAMH) Children’s Choral Festival. A native of Wales, Chrys received her Bachelor of Science degree with Honors in Psychology from The Open University of Wales. She earned a Bachelor of Arts degree in Music and a Certificate of Choral Management from Chorus America. She completed her Master of Nonprofit Management degree at Regis University in Denver in 2001. She is also certified to teach KinderMusik. Chrys’s innovations for Young Voices include the SAMH vision and its highly successful implementation. For SAMH, she has engaged and featured several world-renowned composer-conductors, including Dr. Rollo Dilworth, Dr. David Brunner, Bob Chilcott, Paul Caldwell, Sean Ivory and Dr. Catherine Sailer. She also initiated the Master Classes in Conducting for Sing A Mile High taught by Dr. Sailer. For Young Voices, Chrys created the first Young Voices Yearbook and the Young Voices leadership program, with its Choir Council and Young Ambassadors. She has created and directed Young Voices tours to seven U.S. states, including Hawaii, and to seven European countries.

Margie is the Administrative Director, Education Director and directs TrebleMakers and FirstVoices. She recently retired from the music education faculty at Metropolitan State College of Denver, where she taught the music methods classes and supervises student teachers. Mrs. Camp taught public school music for 30 years and retired from the Cherry Creek School District in 2004 after spending 15 years as choir director at Campus Middle School. Mrs. Camp also served the Cherry Creek School District as the music coordinator. Margie is SWACDA Past President and has been Program Chair for the SWACDA 2008, and 2016 Conferences as well as for the 2018 and 2020 Conferences. She has served both Colorado ACDA and Colorado Music Educators Association in many leadership capacities. Margie has served as clinician, adjudicator and director for workshops, contests and honor choirs throughout the United States. Prior to coming to Colorado, Margie taught in San Antonio. While in Texas, she served the Texas Choral Director’s Association as Secretary/Treasurer and was on the board of Texas Music Educator’s Association. Mrs. Camp received her Bachelor of Music Degree from Trinity University, her Master of Music from the University of Texas at San Antonio, and her Specialist in Education from the University of Colorado at Denver. Margie was recently inducted into the Colorado Music Educators Hall of Fame.

Tyson V. Repke is a former submarine Nuclear Reactor Operator turned teacher, musician, conductor, and actor. He holds a Bachelor’s degree in Music Education from the University of Northern Colorado (graduating summa cum laude) and a Master of Music degree in Conducting from the University of Denver’s Lamont School of Music. He has taught/conducted middle school, high school, collegiate, and adult choirs in Colorado for over nine years. Currently, he conducts the choirs at Mountain Ridge Middle School.  Mr. Repke is also an avid performer, singing almost every style from opera to jazz. He has been a section leader and/or featured soloist for numerous performing ensembles across Colorado, performed the National Anthem for several sporting events including DU Pioneers Hockey and the Denver Broncos, and sang backup vocals for Josh Groban in concert at Red Rocks Amphitheatre. On stage, he is best known as a character actor, or tenor buffo.

Meaghan recently completer her Master of Music degree from the University of Missouri. She taught K-8 general music and choir at St. Joseph Cathedral School for three years and served worked at Missouri United Methodist Church for several years. She also worked with The Odyssey Chamber Music Series as their performance fellow. She also has been a private voice teacher in Missouri. She moved to Colorado in August and is the choir director for The Academy and looking forward to working with 5th through 12th graders. Meaghan is very excited to work with Crescendo!

Tamiya recently completed Master’s of Choral Conducting degree at The University of Denver and is the new choir director at Highlands Ranch High Schoo.  She has taught elementary school music for the past 5 years at Palmer Lake Elementary School. Her favorite part of working with kids is the “light bulb moment.” She is looking forward to sharing many “light bulb moments” with Crescendo this year.

Pianist Nick Busheff received his Bachelor of Music degree from the University of Colorado winning numerous performance awards and was a scholarship student at the Aspen Music Festival and School. After acceptance to the Juilliard School and Peabody Conservatory, Nick received his Master of Music in piano performance from the Cincinnati Conservatory. As an educator he joined the piano faculty at Metropolitan State University where he taught for fifteen years. Nick has shared the stage with Grammy, Oscar and Tony-winning artists and performed for celebrities and political dignitaries. He recently toured Germany and Iceland performing original compositions and his arrangements of classical, jazz and sacred favorites. His music has been featured in award-winning films and theatrical productions including Nancy Stohlman’s The Monster Opera which was staged in 2015 to rave reviews. Since 2013 Nick has been an annual guest artist at the United States International Duo Piano Competition and currently maintains a rigorous performance schedule playing in a variety of ensembles.

Born at Wright-Patterson AFB, but a native of Bainbridge, Georgia, Benjamin has studied organ with Mark Coffey, Laura Ellis and Joseph Galema, and piano with Annette Joe and Betty Sue Shepherd. He received his Bachelor of Music in Organ Performance from the University of Florida and the Service Playing Certificate from the American Guild of Organists. Since moving to Denver in 2009, Benjamin remains active in the metro area as an accompanist, working regularly with choirs and productions in multiple school districts. He also serves as Organist at Holy Comforter Episcopal, Broomfield, where he provides service music and accompanies the choir on the 1869 Hook organ, Colorado’s oldest pipe organ. Previously, Benjamin served as Associate Music Director for First Plymouth UCC in Englewood, CO, and Organist at First UMC, Gainesville, Florida. A past Dean of the Denver Rocky Mountain Chapter, Benjamin continues his work with the local organ guild as Calendar Coordinator.

Kimean is thrilled to be a part of Young Voices of Colorado once again. After moving to Colorado at the age of ten in the fall of 2007, she studied classical piano under the excellent tutorage of Valerie Mishek for seven years and won musical competitions, including placing 2nd at the 2014 Sonatina Festival performing Beethoven’s Tempest Sonata. She also participated in YVC choirs from 2009 to 2015, earning the Life Long Singer award, singing in Signature, and serving as a member of the choir council and as an ambassador at the annual Sing S Mile High event. Her final YVC performance was the honor of singing the Ave Maria solo in the Notre Dame cathedral in Paris during the 2015 YVC Europe tour. As a songwriter, Kimean has published a 10-track album of originals in 2014 titled Reflections and writes devotional music based on the book of Psalms for the Smoky Hill Vineyard Church, where she serves as a worship leader. Kimean aspires to become a choral conductor and is majoring in vocal performance and music education with a computer science minor at the Metropolitan State University of Denver.

Prior to joining Highlands Ranch High School Choir, Chantal was a member of the Associated Boards of the Royal Schools of Music (ABRSM) with many years’ experience of teaching music skill from children to adult for the Royal Schools of Music examination. Chantal provides piano accompaniment to music competitions to all instruments, including voice. She has performed scheduled concerts and musical productions for many churches and Highlands Ranch High School.

Anya Kopotilova primarily works during rehearsal hours on a variety of projects ranging from uniforms to fundraisers. Anya became involved in Young Voices in 2013 when her children Daniel and Chiara joined YVC. Any has served as a Rehearsal Assistant for TrebleMakers, Choristers and Brio in the past. Anya received her Bachelor of Arts in Linguistics from Chelyabinsk State University, in Russia and speaks several languages.

Bryce Martin is the Administrative Assistant at Young Voices of Colorado. Born and raised in Denver, Colorado, he recently completed his Bachelor of Music at Metropolitan State University of Denver and is the new music teacher at Arrowwood Elementary School in Douglas County.. Bryce first started his musical journey when he began to learn to guitar from his father when he was nine years old. Bryce is also an active performer within the Denver area having played guitar in various musical groups playing a multitude of styles including rock, blues, and even mariachi music. Currently he performs monthly at Holy Name Catholic Church and the Cathedral Basilica with a group that plays Spanish Catholic Mass music. Along with music he also has a love for the art and sport of Tae Kwon Do where he has competed at both the national and international levels from 2007 to 2012 and earned his 3rd degree black belt in 2017. 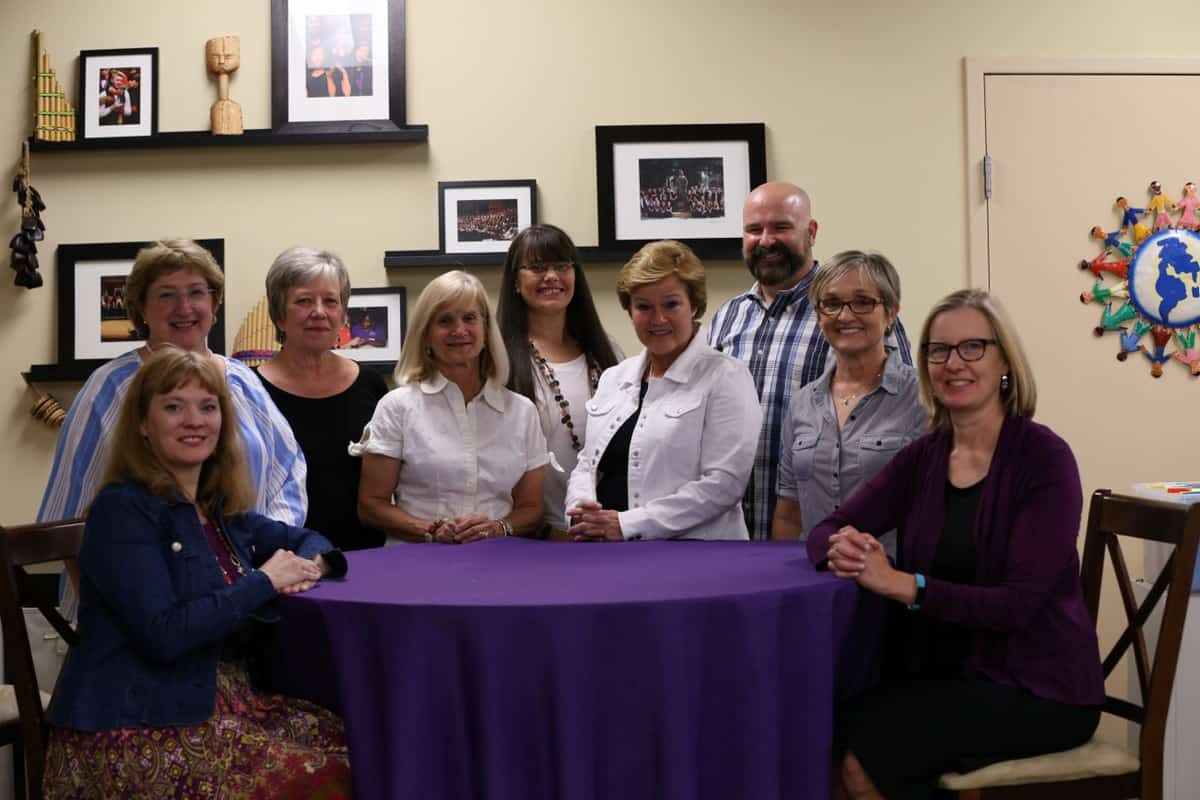 Young Voices of Colorado is a non-profit corporation recognized by the Colorado Secretary of State and sanctioned by the Internal Revenue Service under section 501(c) 3. We are governed by a Board of Directors of community volunteers, which takes responsibility for the fiscal, legal and ethical affairs of the organization.